Content of Lewy bodies: The inclusions in the neurons contain mainly a membranous medley instead of the anticipated protein fibrils. (Image: University of Basel, Biozentrum)

An international team of researchers involving members of the University of Basel’s Biozentrum challenges the conventional understanding of the cause of Parkinson’s disease. The researchers have shown that the inclusions in the brain’s neurons, characteristic of Parkinson‘s disease, are comprised of a membranous medley rather than protein fibrils. The recently published study in “Nature Neuroscience” raises new questions about the etiology of Parkinson’s disease.

Parkinson’s disease is one of the most common neurodegenerative diseases worldwide. This disease is typically accompanied by motor defects such as the tremor of arms and legs, slowness of movements and muscle rigidity, which occur together with other non-motor symptoms. A characteristic of this progressively worsening and currently unstoppable disease are neuronal inclusions, so called Lewy bodies, that occur in many regions of the brain in the course of the disease. For decades, it was assumed that Parkinson’s disease is caused by deposits of insoluble fibrils consisting of the protein alpha-synculein in the Lewy bodies.

Membrane fragments instead of protein fibrils

In their current study, the Dutch, German and Swiss researchers, including Prof. Henning Stahlberg’s team, refute this long held common thesis. Using state-of-the-art electron microscopes, they have been able to show that the Lewy bodies contain mainly membrane fragments, lipids and other cellular material instead of the anticipated fibrils.

“We used correlative light and electron microscopy and other advanced light microscopy methods to take a closer look at the brain of deceased Parkinson’s patients and discovered that the Lewy bodies consist mainly of membrane fragments from mitochondria and other organelles, but have in most cases no or only negligible quantities of protein fibrils,” says Stahlberg. “The discovery that alpha-synuclein did not present in the form of fibrils was unexpected for us and the entire research field.” 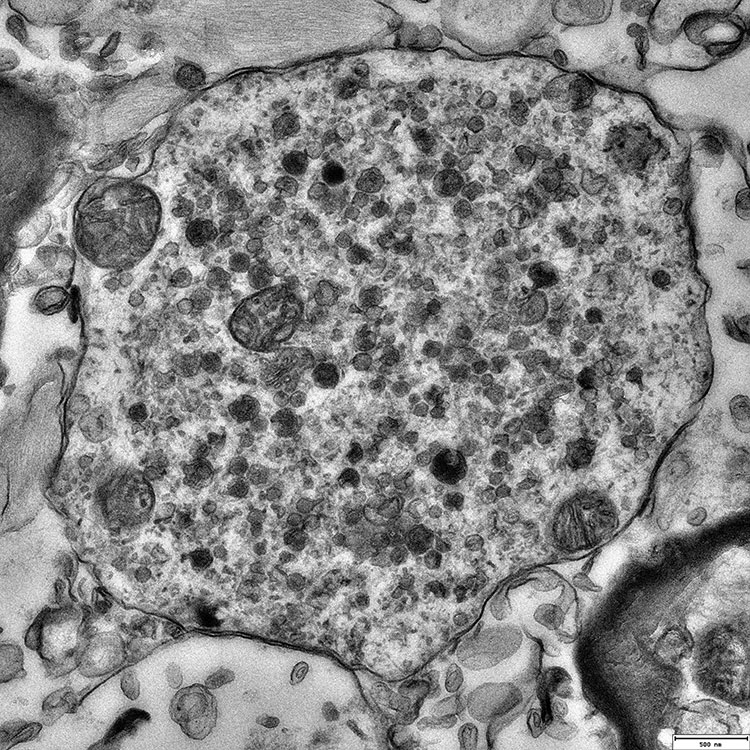 Currently, the researchers do not know yet where and in what form the protein alpha-synuclein is hidden amongst the membrane fragments and how it is involved in the formation of Lewy bodies. However, their work indicates that the laboratory-based model of alpha-synuclein fibrils as a cause and mechanism of Parkinson’s disease should be revisited. “Our finding indicates that in order to uncover the causes of a disease one needs to be more strongly guided by the exploration of the pathology in humans,” explains Stahlberg

Ultrastructural insights into cell organelles
“The questions why it has taken so long to better characterize Lewy bodies, can perhaps be answered with the previous sample preparation and electron microscopy methods. Today’s technologies enable us to have a much more detailed look into the morphology of human brain,” explains Stahlberg. “The big question for us now is: How does alpha-synuclein contribute to the formation of Lewy bodies, if not present in form of fibrils?”

With their work, the researchers raise many new questions regarding the role of the Lewy bodies in the etiology of Parkinson’s disease. The insights into such intracellular structures also provide important clues for potential therapeutic approaches to prevent or stop the formation and propagation of Lewy pathology in the brain.