Tiny implants for cells are functional in vivo

For the first time, an interdisciplinary team from the University of Basel has succeeded in integrating artificial organelles into the cells of live zebrafish embryos. This innovative approach using artificial organelles as cellular implants offers new potential in treating a range of diseases, as the authors report in an article published in Nature Communications. 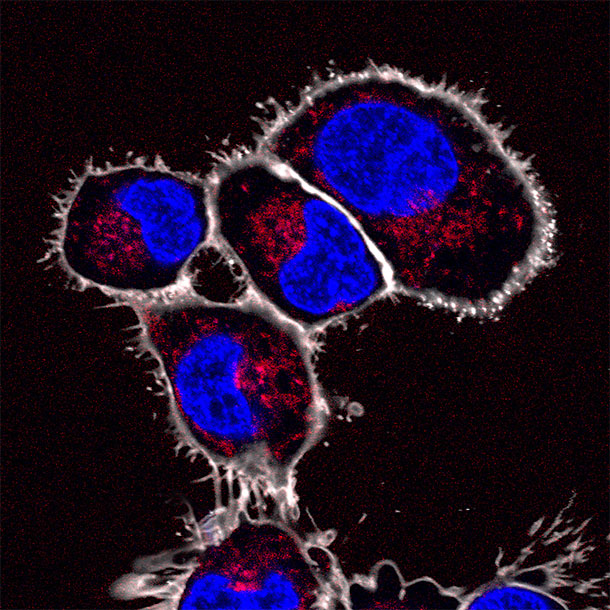 Artificial organelles in the scavenger cells of a zebrafish that were made visible by a fluorescent reaction. The fluorescence only occurs when the enclosed peroxidase enzyme is activated and reacts hydrogen peroxide produced by the scavenger cells. The researchers have thus provided evidence that the artificial organelles function in vivo. (Image: University of Basel, Department of Pharmaceutical Sciences)

In the cells of higher organisms, organelles such as the nucleus or mitochondria perform a range of complex functions necessary for life. In the networks of the Swiss Nanoscience Institute and the NCCR “Molecular Systems Engineering”, the group led by Professor Cornelia Palivan from the Department of Chemistry at the University of Basel is working to produce organelles of this kind in the laboratory, to introduce them into cells, and to control their activity in response to the presence of external factors (e.g. change in pH values or reductive conditions).

These cellular implants could, for example, carry enzymes able to convert a pharmaceutical ingredient into the active substance and release it “on demand” under specific conditions. Administering drugs in this way could considerably reduce both the amounts used and the side effects. It would allow treatment to be delivered only when required by changes associated with pathological conditions (e.g., a tumor).

Tiny capsules with an enzymatic cargo
The artificial organelles are based on tiny capsules that form spontaneously in solution from polymers and can enclose various macromolecules such as enzymes. The artificial organelles presented here contained a peroxidase enzyme that only begins to act when specific molecules penetrate the wall of the capsules and support the enzymatic reaction.

To control the passage of substances, the researchers incorporated chemically modified natural membrane proteins into the wall of the capsules. These act as gates that open according to the glutathione concentration in the cell.

At a low glutathione value, the pore of the membrane proteins are “closed” – that is, no substances can pass. If the glutathione concentration rises above a certain threshold, the protein gate opens and substances from outside can pass through the pore into the cavity of the capsule. There, they are converted by the enzyme inside and the product of the reaction can leave the capsule through the open gate.

Also effective in living organisms
In collaboration with the group led by Professor Jörg Huwyler of the Department of Pharmaceutical Sciences at the University of Basel, the artificial organelles have also been studied in vivo. “We’ve now been able to integrate these controllable artificial organelles into the cells of a living organism for the first time,” says Cornelia Palivan.

The researchers chose zebrafish embryos because their transparent bodies allow excellent tracking of the cellular implants under a microscope when they are marked with a fluorescent dye.

“In this study, we showed that the artificial organelles, which are inspired by nature, continue to work as intended in the living organism, and that the protein gate we incorporated not only works in cell cultures but also in vivo,” comments Tomaž Einfalt, the first author of the article and graduate of the PhD School of the Swiss Nanoscience Institute. The idea of using artificial organelles as cell implants with the potential to produce active pharmaceutical compounds, for example, opens up new perspectives for patient-oriented protein therapy.

Image
A print-quality image for this press release is available in the media database.